For over two decades, medical researchers have closely focused on inflammation in the body and its power to activate health problems, heart and cardiovascular diseases in particular.

It has been determined that inflammation anywhere in the body can set off a series of biochemical changes in the bloodstream; those that are designed to help the body repair inflamed tissues. However, when inflammation becomes chronic, blood chemistry never returns to normal, and trouble ensues. Researchers have noted this significantly in its increased risk of heart attack and stroke. 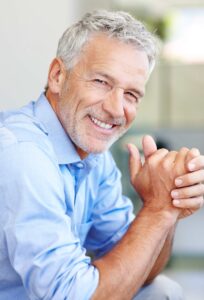 Chronic inflammation can exist in the mouth, set at a constant “boiling point” due to advanced gum disease (known as periodontitis). Common symptoms are puffy gums that turn red in color; inflamed, swollen, or bleeding gums; gums that loosen from the base of teeth; persistent bad breath; gums that become spongy and bleed easily; and, pus pockets that form on the gums at the base of teeth.

In addition to creating higher risks of heart disease and stroke, advanced gum disease has been shown to increase the risks for diabetes, arthritis, preterm babies, some cancers, Alzheimer’s disease, high blood pressure and erectile dysfunction (ED). Yes, even ED.

Below are findings of several recent studies showing that periodontitis to be a significant risk factor for erectile dysfunction. Rather telling is as gum disease worsens, so does erection impairment.

• Turkish investigators studied 162 men, age 30 to 40. Eighty-two of the participants had normal erection function and 80 who complained of ED. Some men in both groups had chronic periodontitis, but the condition was more than twice as prevalent in the ED group. Men with periodontitis who also presented with decayed or missing teeth showed the greatest level of ED.

• Chinese scientists examined data of several studies involving a total of 213,076 men. Compared with those who had good erection function, those with ED had three times the risk of periodontal disease.

• The University of Granada School of Dentistry found that men with severe gum disease are more than twice as likely to suffer from erectile dysfunction. This was true even after careful adjustments were made for other health issues that could distort the findings, including socioeconomic data. In the study, 80 men with clear indications of erectile dysfunction were given a periodontal examination. According to the researchers, 74 percent of the participants with ED also presented with chronic periodontitis. The researchers concluded that patients with chronic periodontitis were more likely to have erectile dysfunction independent of other confounders.

• Israeli researchers surveyed the erection function of 305 men, average age 40, and then examined their gums. Those with chronic periodontitis had the greatest risk of ED.

Health risks such as our propensity for cancer or a decline in eyesight can occur regardless of lifestyle choices. However, it makes perfect sense to eliminate or greatly minimize risk factors, including periodontal disease. Research findings on ED’s association with infectious oral bacteria of gum disease will hopefully spurn more men to devote a higher level of commitment to care for their gums.

It takes mere minutes a day to maintain a healthy mouth and reduce the risks for developing gum disease. 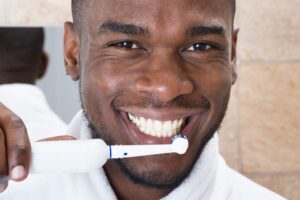 These include brushing teeth for at least two minutes twice a day. Daily flossing will remove bacteria in the gums that may elude brushing. And, keeping the mouth moist will support saliva flow, the mouth’s natural rinsing agent.

If you feel your erections are worth the effort, then these measures will become higher priorities in your daily hygiene upkeep. It is also important to see a dentist regularly. If you don’t feel anything is wrong because “nothing hurts,” you are only cheating yourself.

Gum disease can exist without obvious symptoms. Catching it early and before it begins to “boil” will help you avoid costly and time-consuming treatment later. And, these steps may keep your sex life active.

If you are experiencing any of the signs of gum disease (as mentioned prior), please know that gum disease will only worsen without treatment. It is also the leading cause of adult tooth loss.

A periodontist is a dental specialist who treats all stages of gum disease. If it is found to exist, this periodontal specialist can help to resolve the problem and restore your smile to a healthy state in the most conservative way possible. He or she can then help you maintain good oral health, which will support your overall health.