Even OTC Pain Relievers Have Risks.

When we see new patients in our Asheville periodontal dental office, it’s common to hear comments about how the appointment was the most thorough they have ever experienced. We pride ourselves on our dental hygienists’ skills for dental cleanings, exams of gum tissues, and in advising patients of ways to maintain good oral health at home.

As a periodontal specialist, I perform a thorough examination of the teeth and oral tissues, both visually and through digital imaging (x-rays). In some cases, we use Cone Beam 3D imaging. Our goal is to have an in-depth view of each patient’s oral anatomy and intricate areas that can reveal problems, both potential and existing.

Our hygienists also work to consider the patient’s whole health so we can tailor their treatment to unique needs. They typically begin by noting any medications the patient takes, both over-the-counter or prescription. Herbal supplements taken regularly are also noted. Why? 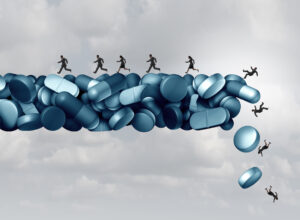 The number of American adults who regularly use medications for pain relief has significantly expanded. For most mild to moderate pain, preferences for non-prescription pain relievers (analgesics) now lean towards non-steroidal anti-inflammatory drugs (NSAIDs) or acetaminophen.

There are a wide variety available over-the-counter (OTC), which means they are readily available without a prescription. Because these can be purchased right off the shelf, many people assume these medications are safe.

What consumers often miss, however, is the fact that many of these can have side effects. They can also interact with other medicines, dietary supplements, and alcohol consumption. Because pain medications contain the same ingredients found in a number of prescription drugs, adults may actually be taking a risky dose when combining medications.

According to a report from NBC News, Americans are taking too much of over-the-counter pain relief meds. In a study conducted by a Boston University School of Health researcher, nearly one in five users of popular headache remedies like Advil or Aleve admitted exceeding the recommended daily maximum dose during a one-week period.

Due to the side effects and without medical oversight, this can lead to higher risk for serious health problems, including gastrointestinal bleeding and heart attacks.

Before taking these meds, it’s important to get to know the types of pain medications (also known as analgesics) and how they work.

NSAIDs are an acronym for non-steroidal anti-inflammatory drugs. In this category are pain relievers that include aspirin, ibuprofen (Advil, Motrin), and naproxen sodium (Aleve, Naprosyn), and ketoprofen (Orudis).

Non-steroidal anti-inflammatory drugs reduce pain and inflammation by inhibiting production of prostaglandins, which are the hormone-like substances that cause them. Unfortunately, NSAIDs also block other prostaglandins that protect the stomach lining, regulate blood flow to the kidneys, and support blood clotting.

This is bad news for people who are regular users of NSAIDs or those who take high doses since they increase the potential for stomach inflammation, peptic ulcers, and intestinal bleeding. This is especially true for older adults. Taking NSAIDs in high doses or for an extended time can increase this risk even more.

An alternative is acetaminophen (Tylenol, Anacin-3, etc.), which relieves pain by affecting the areas of the brain that receive pain signals. Acetaminophen is best when the need is to reduce pain and fever, but is essentially ineffective in calming inflammation. The up side, however, is it will not cause the bleeding or clotting problems that have been associated with NSAIDs.

Yet, just as NSAIDs have a down side, so does acetaminophen. This analgesic is metabolized by enzymes in the liver. Taking too much can lead to liver damage in susceptible people, such as those who drink alcohol regularly. This is why it is important to read the labels of any medication so you don’t exceed the maximum daily dose of acetaminophen.

For most, taking non-prescription pain relievers – as directed on the label – is generally safe. The potential for trouble arises when you combine the following:

• Some NSAID and acetaminophen products, as well as cold, sinus, and allergy remedies, contain a blend of pain relievers. Kidney damage can result from extended use of painkillers that combine analgesics from different sources.

• A wide number of prescribed painkillers contain acetaminophen, such as Darvocet and Vicodin. Some prescriptions contain NSAIDS, including Celebrex and Percodan. Before you combine prescription medications with over-the-counter painkillers, be sure to check with your prescribing doctor first.

• NSAIDs can interact with other drugs, especially ACE inhibitors, anticoagulants, beta blockers, lithium, and methotrexate. Aspirin interacts with anticonvulsants, corticosteroids, insulin, and sulfa antibiotics. If you take any of these prescription medicines, check before using NSAIDs or aspirin.

• People are often surprised to learn that some herbal supplements, including garlic, ginger, feverfew, ginkgo, and ginseng, can thin blood. You should avoid taking these supplements while taking NSAIDs. When having procedures that may involve bleeding gums, these supplements, or combining them with NSAIDs, can complicate your procedure and the healing process.

If you have questions, call 828-274-9440. You may want to begin with a free consultation to get to know us, or schedule complete periodontal examination, especially if you have signs or symptoms of periodontal (gum) disease. These include:

• Sore, tender gums that bleed easily while brushing teeth
• Frequent bad breath
• Gums that recede from the base of teeth, exposing darker, more sensitive sections of the tooth’s root
• Gums that are swollen
• Gum tissues that darken to more of a red color versus a healthy pink

If these signs exist, it is important to seek a periodontal evaluation as soon as possible. Gum disease will only worsen without treatment and is the nation’s leading cause of adult tooth loss.

At Biltmore Periodontics in Asheville, we are always happy to see new patients. A referral is not always needed.