Pregnancy Gingivitis Can Affect More Than The Mother’s Health

Is there any other time in a female’s life when they must be as health conscious as during pregnancy?

Pregnant women, it seems, are given a long list of guidelines to follow… What they should not eat or drink, what medications to avoid, and even down to what beauty products to give up. Yet, the 9 months of discipline is well worth the greater potential to bring a healthy baby into the world. 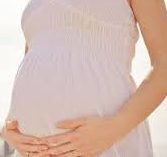 Along with the other health guidelines, obstetricians are now urging pregnant women to pay particular attention to their oral health. For decades, research has tracked a correlation between inflammatory bacteria in the mouth to a number of serious health problems, including many far beyond the mouth.

Once the infectious bacteria of gum disease enter the bloodstream (typically through tears in weakened gum tissues), it can trigger inflammatory reactions, many serious and some that can have deadly consequences. It is the nation’s’ leading cause of adult tooth loss and has been linked to heart disease, stroke, some cancers, diabetes, arthritis, high blood pressure and impotency.

However, because of their susceptibility, the risk for full-blown gum disease is higher for pregnant females with nearly a third developing gum disease. Yet, it’s not just the oral (and overall) health of the mother that can be affected.

Research has shown that gum disease increases the risk for pre-term delivery (prior to 37 weeks) and babies of low birth weight (less than 5.5 lbs.). One study showed the preterm birth rate for females without gum disease to be approximately 11% compared to nearly 29% for pregnant women with moderate to severe periodontal disease.

One study showed that pregnant women with gum disease were 4 – 7 times more likely to deliver prematurely (before week 37) and underweight babies than mothers with healthy gums. Too, the women with the most severe periodontal (gum) disease delivered most prematurely, at 32 weeks.

Other findings show that gum disease increases the risks of late-term miscarriage and pre-eclampsia. When oral bacteria reach placental membranes via the bloodstream, inflammatory reactions can trigger pre-eclampsia or early labor.

In one study, for example, pregnant females with higher blood levels of antibodies to oral bacteria also had higher rates of preterm birth and babies of low birth weight. These elevated antibodies have been found in amniotic fluid and fetal cord blood samples of infants who were preterm or of low birth weight at birth.

Oral problems in pregnant females can begin even when the mother-to-be is following the same oral hygiene routine as they have previously. The greater susceptibility can be blamed on fluctuating hormone levels during pregnancy. These changes increase the risk for gingivitis (inflammation of the gums) and periodontal disease.

This is the result of an increased level of progesterone in pregnancy, which makes oral bacterial growth easier. Progesterone also makes gum tissues more sensitive to plaque. For those who have significant gum disease prior to pregnancy, being pregnant can make the condition worse.

Gum inflammation typically appears between months 2 and 8 of pregnancy. Signs of pregnancy gingivitis range from gums that are red rather than a healthy pink. Gums will often bleed when brushing teeth and be swollen and tender in spots.

The goal is to prevent pregnancy gingivitis before it occurs. Be committed to a thorough oral hygiene regimen at home, which includes brushing twice a day, flossing daily and swishing with an antimicrobial mouth rinse. Be sure to keep your 6-month cleanings and exams. These will remove any plaque buildup that has occurred between visits. 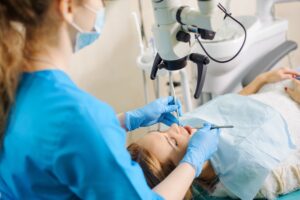 A periodontist has specialized training in the diagnosis and treatment of all levels of gum disease – in a way that is safe for pregnant women (as well as all patients). Signs and symptoms of gum disease include gums that bleed when brushing, frequent bad breath, swollen or tender gums, gums that loosen or pull away from the base of teeth, or gums that darken in color.

If you have any of these symptoms (whether pregnant or not), you are urged to schedule an appointment at your earliest convenience. Call our Asheville periodontal dental office at 828-274-9440 to arrange an examination to begin.